I bought both of these discs at Ernie King’s Music on the main drag of Wingham, ON, when I was still in high school. Man, Ernie King’s… that takes me back. He sold musical instruments, offered lessons, did repairs, and had a small music section at the front. Cool place! 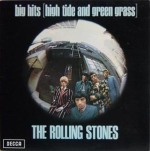 Released in 1966 (US) and 1968 (UK), with different covers and track listings (of course). And, as usual, it’s a brilliant blast of Stones. Not a bad song here, I love the early stuff.

What’s most interesting is the differences between the releases. The UK release had two more tracks over all. Many of the tracks are the same, however, and they’re in a different running order…

Have You Seen Your Mother, Baby, Standing In The Shadow?
Paint It, Black
Come On
Lady Jane
Little Red Rooster

whereas the US got:

Of course, it was a big success all over the place, and it remains a cool source for a sweet swath of early Stones hits. I love it!

Track Listings (All songs by Mick Jagger and Keith Richards, except where noted.):

Side 2
1 19th Nervous Breakdown
2 Heart Of Stone
3 Get Off Of My Cloud
4 Not Fade Away (Norman Petty/Charles Hardin)
5 Good Times, Bad Times
6 Play with Fire (Nanker Phelge) 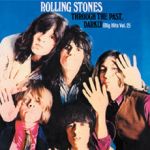 Through The Past Darkly (Big Hits Vol. 2)

Released just after Brian Jones’ departure from the band (and subsequent death) in 1969, the vinyl release of this one had an octagonal cover (cool!).

The name of the album is a play on a line from the KJV translation of I Corinthians 13: For now we see through a glass, darkly, but then face to face…, but it is more likely the Stones intended a homage to Ingmar Bergman and his 1961 film Through a Glass Darkly.

In the inside flap of the album, there is an anonymous poem chosen by Jones, which reads: When this you see, remember me, and bear me in your mind. Let all the world say what they may, speak of me as you find.

And once again, there were differences between the UK and US editions. The UK got one extra track, and again they’re in a different track order…

You Better Move On
We Love You
Sittin’ On A Fence

Paint It, Black
Have You Seen Your Mother, Baby, Standing In The Shadow?

Track Listings (All songs by Mick Jagger and Keith Richards, except where noted.):

Side 2
1 Honky Tonk Women
2 Dandelion
3 2000 Light Years from Home
4 Have You Seen Your Mother, Baby, Standing in the Shadow?
5 Street Fighting Man

It’s a no-brainer, folks: buy them both! You decide if you want UK or US edition. Hell, buy all 4!

4 thoughts on “Rolling Stones – Big Hits: High Tide And Green Grass, and Through The Past Darkly (Big Hits Vol. 2)”