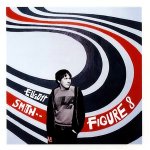 I don’t know from Elliott Smith, but his legend post-mortem carries weight. All deference to Elliott proponents, but what I heard here was fairly straight-forward pop rock songs, beautifully done but nothing all that memorable.

The songs are sweet, almost precious, but is he feeling what he’s singing or just writing for effect? I assume fans would say the former, yet one wonders. Apparently other efforts were less produced, more intimate, and this is his most commercial effort. Fair play.

Lana Teramae | Me, Myself and Time
Cincinnati Babyhead

"I'm living rent-free in the back of your head."

A trip through rock and metal history of the 1980s