If you can believe it, totally not communicating at all, Deke and I have planned reviews of this album to post one day apart! We totally should have done a dual review. Ah well. GO READ DEKE’S AWESOME TAKE RIGHT HERE!!! 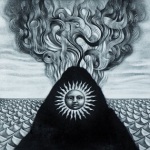 I’m a big Gojira fan, late to the game after seeing them live on the L’Enfant Sauvage tour and being blown away by their presence and their awesome metal. I’m on the hunt for all their stuff now! Found this CD while we were at the cottage a few weeks ago, which pleased me because nowhere in my town seemed to be stocking it…

The Shooting Star starts us off with a satisfying chug, complete with that ethereal Gojira-ness that’s so pleasing. Silvera^ ramps us up into the Gojira we’re more used to, that heavy crush and crunch, with wicked-slick drumming and those melodic assassin guitars, often times almost classical in approach! This one would slay crowds, live, especially with their light show! The Cell blasts us even faster, machine gun-style before dropping into an absolutely menacing riff built to crush your head.  And then back again! Yeahhhhh!!!

Stranded^ is the single, and it’s a punishing track, that guitar line and that huge anthemic riff, and again those drums and time signatures… Oh man, this one owns! Yes! Following on its heels is Yellow Stone, a slithering stomping instrumental interlude. I liked it! The title track, Magma, keeps the pace slower, but there’s those guitars again, writhing over top of the heavy bottom end. Then the chug roars in and away we go, a chant-like quality to it… like Ghost, honestly. It’s a good thing!

We intro into Pray, atmospheric while the guitars pound away machine-like, and the the drums haha whoa what an intro! This rules! There’s a spooky sound underneath, possibly a carry-over from the title track. Again with the chant-like bit, these two must be companion tracks. Come chorus time, however, it’s full on Gojira assault hahaha yes! Oh man, nobody crushes quite like these guys! And the outro rules! Only Pain brings back that guitar from Stranded, and the track growl stomps your brain into a fresh pulp. Fuck yes! It ends damned abruptly, though!

Low Lands does more of that inimitable Gojira menacing skittering through the intro, the vocals droning over top. Then it’s lift-off again, barely controlled chaos straining to get out and dominate everything. And finally, Liberation, which starts off with an almost guqin-like sound, before taking off into acoustic guitar noodling over bongo drums. Every once in a while there’s a bit of a rumble in the background, but it could just be mic noise I picked up through the good headphones – it never amounts to anything else. After the crush of the album, this feels like a track recorded for shits and giggles during studio downtime, and probably wasn’t a necessary inclusion. An odd way to end the album!

It’s simple – Gojira rules! I like this record tons. It’s very different from L’Enfant Sauvage,  all over the map as only they can do it, and still sounds like only they can sound. But it kicks all sorts of ass, and has a real feel to it. GOJIRA!

^ This song was a single.