First off, all apologies. I’d said in my post yesterday, announcing this new series, that I would have this here yesterday afternoon. It didn’t happen. I upgraded my computer and ended up busy with that. So here we are today.

Folks, we need to talk about the amazingness and generosity of our friendly neighbourhood Mike. Our venerable Lebrain. Not only does he continue to rock us on his web site, and remain a true stand-up dude, but he’s given me so much great music, over the years (we’ve known each other since the mid-late 90s) and, as if all of that wasn’t enough, I recently received another box in the mail from Lebrain HQ full of another mind-blowing pile of greatness!

This series is an homage, and huge thanks to Mike for all of these great tunes. It was Christmas In September! Seriously, Dude. THANKS HEAPS! 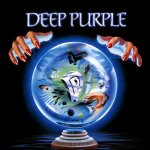 Here we have Deep Purple in 1990. King Of Dreams starts off with some heavy breathing (haha), and then a driving beat over a sweet 80s action movie soundtrack tune. The pay-off chorus pulls you up with it. Cool. Next it’s The Cut Runs Deep, which begins with some sweet keys before giving over to an absolutely crushing guitar riff and then full band rockfest. Now that’s rock. Love the keyboard solos.

Fire In The Basement’s intro guitar tries to tear into our ear, and then it breaks into a sweet Purple shuffle swing rock beat. Bluesy! Fun! Crazy soloing! This one would sit well on In Rock. Truth Hurts has a stately rock stomp to it, and some truly great guitar work and bluesy vocals hells yes.

Breakfast In Bed has that sweet rock swing to it too, that silky bluesy guitar in the background. Love the chorus bit, it reminds me of Aerosmith. Love Conquers All starts off with strings, just beautiful. It shifts into a huge, glorious uplifting ballad. Again that guitar solo, damn.

Fortuneteller boils into a slinky bluesy tune, packed with elements that all come together to make a cohesive whole. Just like all Purple tunes, that way… Too Much Is Not Enough jams with keyboards and yet another classic-sounding riff. Cowbell! Haha yes. and the middle section, with that run-line and then the soloing… damn. And finally, Wicked Ways teases a bit before getting its feet and taking off at full rockin’ gallop. It takes on an epic quality, by the end, building to a crescendo that’s nigh on classical in its scale. Then back into the rockin’! Hells yes. I think I liked this track as one of the best!

This is a fantastic record. It’s definitely of its time, I can hear the 80s all through it. But there’s nothing wrong with that. It’s a solid rock album, no doubt.

Wiki tells me this is the only Purple record to feature former Rainbow vocalist Joe Lynn Turner, and I have to say I think he did a fantastic job. I was shocked to read that this one had underwhelming sales and response. I mean, there was this:

Following its release, Slaves and Masters has been met with mixed reception from critics. Allmusic’s Alex Henderson gave the album two stars out of a possible five, saying “The songwriting is weak and pedestrian, and most of the time, the once-mighty Purple (who were at least 16 years past their prime) sound like a generic Foreigner wannabe”. Jon Lord himself, more than his mates (Glover and Paice), never recognized this record as a Deep Purple album.

Ouch! Hey Alex Henderson, I liked it a whole lot better than that! It’s a time capsule, sure, but it’s still a rockin’ good time. Thanks heaps, Mike!