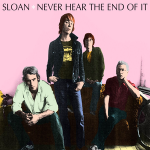 Exactly 10 years ago today, this album was my first-ever post on the KMA. I didn’t go song by song, back then, so this time I will! Time to revisit a favourite Sloan record of mine*!

So here we go, with Aaron’s 10th Anniversary Review Of Sloan – Never Hear The End Of It:

Flying High Again eases us into the record with its easy beat and gliding feel. It’s a short jaunt, though, because we rollright into the brilliant Sloan pop party rock, complete with hand claps, of Who Taught You To Live Like That? This was a single, and with good reason. I’ve Gotta Try is next, with its spacey vocals intro and that great tom drum pattern. As the guitars build, it becomes a sweet confection of Sloan riff rock. Hells yes!

Everybody Wants You keeps the good feeling alive as the acoustic strumming and drums and guitars wait their turn to stomp rock a bit. Great stabs of sound and those sweet Sloan-y vocals ( you know it well). Listen To The Radio goes spacey again, floating on a bed of gentle rock. Sloan does Floyd, awesome. Fading Into Obscurity slows things down into beautiful balladry with wonderful chord changes. When it picks up, it isn’t by much, and is strongly redolent of the Beatles. But wait! Then it starts to rock.. briefly… then back, then up again, then a brilliant piano and handclap bit… wow, this one’s amazing. Talk about control and brilliance.

I Can’t Sleep jam rocks on a simple riff and that ride cymbal and more spacey sounds. Love that solo guitar line. I’m loving it, despite it being only 0:53 long. Someone I Can Be True With gleefully Sloan rocks us into another relationship song, and with even more handclaps! But right quick it’s Right Or Wrong, a sweet pop confection with all the right elements in the right places. Have I ever told you that I love this band? ‘Cos I do!

Something’s Wrong brings the big rolling fuzz riff as it stomps around with rockin’ on its agenda. The mix is wild on this one, the vocals (including the shout-alongs) back in with the instruments, so it’s all one big happy wash of the rawk. It’s also only a minute or so long, then it’s the bluesy rock riffs of Ana Lucia, the bell of the ball. Right around the 2:00 minute mark, it goes to a lovely acoustic guitar bit briefly but the rock smacks big in huge and away we go! Without that break, I might’ve said this one went on a bit long. Fortunately, Sloan already knows how to handle this.

Before The End Of The Race buzzes in and stutter-rocks us sweetly with that bass line rumbling and the guitar riffing, then the drums start pounding… when it takes of the piano joins in and the harmony vocals and there’s even a piano solo, and… hot damn. Next it’s Blackout sounds out of tune, and like he’s gonna go off-time with that mouthful of lyrics, but it all holds together as it falls together perfectly into a stagger of a rocker that would surely kill in a live setting. I Understand is another of those happy Sloan bouncing tunes, pure sweet pop with that edge of rock underneath. This has to be one of the longest tracks here, at 5:29.

You Know What It’s About is so slow it’s barely moving, flutes and a hi-hat while the guitar works in the background and the vocals tell the story. A neat 1:14! Golden Eyes plays heavy on the balance switch, moving side to side before the shuffle beat kicks in and the bass rolls along. This is definitely psychedelic trippy Sloan! Can’t You Figure It Out goes straight back for the throat with another sweet Sloan rocker. What a catchy hook chorus, just great! I love the lyrics of Set In Motion, “They’re coming out with the movie of my life, based on the novel that shouldn’t have been written either…” while the acoustic guitars jam and the band happily pops along. The vocals here are the clincher.

Love Is All Around pounds its way into our ears while the next indelible Sloan riff (sounds like it’s from the 70s! Cool!) tugs harder at our attention. What a cool, laid-back track. Will I Belong? brings high schooler angst about fitting in to a big riff rocker with gentler but still rocking bits in between. Air guitar heaven! Ill Placed Trust was another single, you know it well so I won’t bore you with what you already know. Just turn it up! What a great tune, aimed at the big stadiums. Up next it’s Live The Life You’re Dreaming Of, a beautiful piano and vocals slower tune. I love how the piano sounds that wee bit out of tune, like an old church piano. By the time the band comes in to add some backbone (and eventually to let it buld to a bigger tune yet), we’re already pulled in completely. This is a highlight track. Living With The Masses starts off with a drill sound, and then it punk pop rocks us into bliss while bemoaning a neighbour doing construction at bad hours. Haha great way to vent.

HFXNSHC is Sloan doing straight up quick punk rock. Of course, I love this track completely and name it another highlight track for sure. Go go go! It falls quickly into the super-bluesy swaggering of People Think They Know Me, what an awesome transition. It’s a cool track, but man we get it, no one knows you though they think they do! Haha fun. I Know You is next, another gentle and gorgeous ballad, Sloan at half-speed – still completely tuneful and full of harmonies and that great sound. But wait! They were just messing with us! It picks up speed and turns into a pop rocker, which also works perfectly. Yay! Of course, it bookmarks with the slower bit at the end…

Last Time In Love is another relationship track, with more handclaps, and a cool shuffling beat and harmony vocals. It’s easy to drift along with this one and want it to go forever… but soon we go into the acoustic guitar and vocal of It’s Not The End Of The World, not the first song on the record to be looking forward to the end of winter. A lovely ballad, I just love it. Light Years rolls in with that same slightly out-of-tune piano and Patrick’s vocals, as the band comes in the tambourine is the glue while the electric guitar playfully noodles in the background. A super-cool song idea, love it. And finally it’s Another Way I Could Do It, a full-on rocker with great bottom-end and a straight-ahead beat. Add in those harmony vocals and this is the kind of tune Sloan can crush out of the park like no one else can. But of course that’s not it, right at the end it goes down to just the guys singing and clapping until they stop and someone noodles on an acoustic guitar  and they talk as the recording ends, a real personal touch.

Yup, that’s 30 tracks, folks. 75:26 of sheer genius. Sloan in 2006 was going for it in every possible way. So many ideas, all brilliantly realized. It’s all over the map, and every stop is absolutely perfect. Going back and forth between their Beatles-esque pop brilliance and their love of big riff 70s rock, with a little punk thrown in, there’s so much on offer here. I love how the tracks all roll together, too, no spaces between. It plays like a concept album, because that’s what it is, and the concept was Be Awesome. You friggin’ nailed it, Sloan!