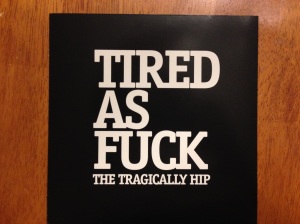 I bought myself a Christmas present.

I know. My lovely wife told me I’m not allowed to buy anything new for myself between now and Christmas. Technically, this one was ordered before she gave this edict, so I’m safe!

It was that fine lad Boppin who told me about this Record Store Day release. I’d had no idea it existed. Given that nowhere in my town participates in RSD, I was sure I would miss it completely. But then Bop mentioned his local HMV was able to order it, I oughta ask mine! Well, I’ve ranted many times about the timid woodland creatures at my shite HMV. But it’s the Hip. I will try!

Turns out, they could order it (with payment up front). And it arrived in about a week. I am shocked at their efficiency, their participation in RSD at all, and the (relative) non-fuss in the whole process.

What a gorgeous 45. The album version of Tired As Fuck on the A side, and the (previously unreleased) US radio edit of At The Hundredth Meridian on the B side. I haven’t actually played it yet, I’ve just been too busy staring at it lovingly. But I presume that the US edit is the removal of the swearing from the song so it can be played on the radio.

You might think $20 was too high to pay for two songs on a 45. Especially when I already own both songs (on Man Machine Poem and Fully Completely), but you don’t know my love of the Hip. I see rarer things, I just buy them. You also may have some sense of how any and all gestures from the band, at this point, are golden, given Gord Downie’s cancer diagnosis and the imminent ending of the band. So yeah. I see Hip, I buy it. 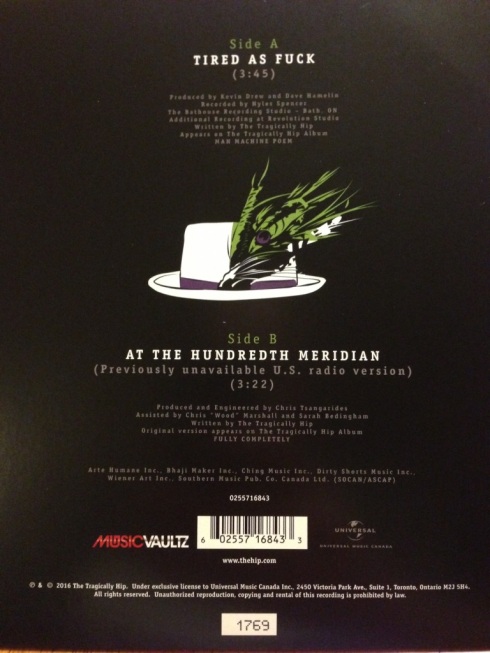 22 thoughts on “Tired As Fuck”