Here’s a 2016 release I wanted to sneak under the wire before the year ends… This review portion of this post adheres to the 200-word challenge. 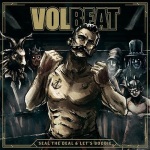 On their 6th record, Denmark’s Volbeat is still kicking ass and taking names. There’s a wealth of stadium power built into their melodic barroom brawl sound. Is it metal? Rock? Punk pop rock? Sure. They’d do well on Epitaph… One thing is certain: they’re damn fine musicians who can play the hell out of their instruments. Two words spring immediately to mind: HELL YEAH!

I was gonna go through this one track by track, but I don’t have to: it fuckin’ rocks, and you can’t help but be lifted by these tunes. They even break out the acoustic guitars for parts of Goodbye Forever, while For Evigt (f. Johan Olsen) has banjo in its Celtic-sounding midsection… Backing vocals from Mia Maja grace several tracks, and Harlem Gospel Choir are on Goodbye Forever. Danko Jones appears on Black Rose, so fuck yes!

For my money, Devil’s Bleeding Crown, Seal The Deal, and The Loa’s Crossing (bagpipes and all!) are the tracks I liked best… for those who know this record, you’ll know the sound of theirs I like best – heavy and fast!

Fully recommended for that rockin’, tuneful lift in your day.

UPDATE: Brother Wilf, who is a huge fan of this band, mentioned that two of these songs are cover tunes! Battleship Chains is a Terry Anderson track by the band Woods. It was later made famous by Georgia Satellites. It was also covered by the Hindu Love Gods, which contained Warren Zevon and members of R.E.M. The other cover here is Rebound, originally by Teenage Bottle Rocket. According to Wilf, Volbeat toured with them, and when the TBR drummer died, they recorded this song as tribute. The internet confirms it!