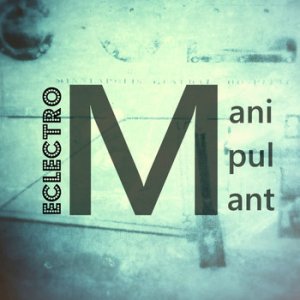 Since starting this blog over ten years ago (oh god we’re old), we’ve always said that if anyone has their own music they want heard to please send it to us and we’ll gladly review it. Over these years, a few people have indeed taken us up on our offer. We love when this happens!

Manipulant found the KMA through Stoneygate, and wondered if I’d like to hear his new record. Of course I would! He also graciously agreed to answer a few of my questions, interview-style, which was very brave as I’m not the world’s best interviewer. Anyway.

This post will be made up of three parts: I: my review, II: an interview with Manipulant, and III: Manipulant’s EPK info and site links.

Disclaimer: This sort of music is not my usual wheelhouse, so listening here takes this old dog outside my already fairly broad comfort zone and that’s fantastic. Challenge me! Others, more knowledgeable than me, would write more eloquent things about this than I can. I’m just going to go from my gut and give impressions of what I hear.

Run (f. Stoneygate) is such a restless track, with a cool 60s spy music feel but then this atmospheric, electronic stuff going on in the background, and with those occasional drum crashes too. Stoneygate’s vocals soar throughout, a perfect fit to this fascinating track. I loved it. Methodical thumps like Nine Inch Nails met Pet Shop Boys in the club, while the vocals come from the side, almost an afterthought, an echo as addition to the music, not overbearing at all.

Dr. Terenzi, I Need Your Expertise (f. Fiorella Terenzi) is a wee bit menacing, with distorted music and occasional vocals over a buzzsaw sound. We’ve entered the land of disorientation, a perfect soundtrack to that dream you can’t quite remember in the morning, though the edges of it nag at you all day. Marshmallow Fabrik’s bass throb with skittering overtop is utterly hypnotizing, perfect for the next club mix.

Faulty Tap is a brief half-minute intermission, some miltary-style drumming with almost a dripping sound added in, but we quickly move into jusq’à la mort nous sépare* (The Organist), which lifts us back up with that same skittering beat and some lovely organ notes held and soul-reviving. There’s real beauty here, even though he says, at one point, “I’m worried, I have a bad feeling about this” and other things besides in echoing vocals to offset it all.   [* translates roughly as ‘until death separates us’ or until death us do part.]

Requiem for 11th Earl Of Sandwich is another brief intermission, only a minute long, with a repeated musical line. Add in clicks and thumps and the atmosphere is definitely a wee bit creepy. But it’s a segue into N/A/B/C/F, an instrumental which brings synths and piano to the fore in one of my favourite tracks on the record. It’s almost as though it’s set to a ticking watch, and while one restlessly hammers out notes, the other holds long and sweet. When the piano goes solo, I’m held completely. This one has lift and hope. Beauty.

And finally, Doctor Terenzi Meets 808 (f. Fiorella Terenzi) brings back the atmosphere and throbbing bottom end, as well as the buzzing sounds and the play with volume up and down to match the beats. “… you are listening to real sounds, scientific sound space…” seems apt to me! He’s calling for Dr. Terenzi, he needs her expertise, but this track has been compiled by an expert already! When the track (and thus, the album) stops abruptly, your ear wants more, so much more.

I said in my disclaimer off the top that this is not my usual type of music. However, I know brilliance when I hear it, and the dark corners and hypnotic lulling of this effort are perfectly done. There’s an energy throughout, a real, thoughtful control, and fearless execution at every turn. Despite things being bleak sometimes, there’s hope, and in this way it is perfect for our times. A truly impressive, packed 27 minutes of music, and an album to which I will return because it will reveal more and more with each subsequent listen.

I thoroughly enjoyed Eclectro. Thank you so much, Manipulant, for this opportunity to hear your work!

A: You found this site through (the awesome) Stoneygate. How did your collaboration with her on this record come about?

M: You are correct, Stoneygate is awesome.  She actually found me.  I had a song featured on Radiocoolio out of Toronto. They do a fantastic job of giving exposure to some really excellent artists.  Stoneygate heard me on the show and dropped me a message. I did a little stalking and found her stuff on the web and although our styles are completely different I felt her vocal would be a good fit on “Run”  I think it creates a nice contrast.

A: How did you reconcile the (rather bleak) social commentary lyrics with such fun musical work on Run?

M: I think Stoneygate described the music as menacing when she first heard it.  That really was what I was trying to accomplish with it.  Something dark and driving.  It needed to try to capture the mood I was seeing around me in the aftermath of the U.S. elections and some of the chaos that was happening elsewhere in the world.

A: Your EPK info indicates that Dr. Fiorella Terenzi is an Italian astrophysicist, which makes this a unique collaboration indeed. Tell us how you came to work with her?

M: Pure luck. I was familiar with her “Music From the Galaxies” album released on Island Records some years ago and a song I was working on reminded me of her Acoustic Astronomy recordings that came from her research.  Really fascinating stuff, look her up.  Anyway, I sent her a copy of what I was working on and she loved it. She asked if she could get involved with the project and I of course agreed immediately.  Now I’m the only person I know with an astrophysicist in their rolodex.

A: From this album I hear worry and fear about society at large, but also hope and beauty. Can you tell us a little bit about the album’s concept?

M: It all evolved from Run. It can be difficult to maintain a theme throughout an album but I had several bits of things I had been working on at different times that all seemed to fit together. I don’t typically delve into social issues in my songwriting but I guess at the time it was something I felt appropriate.

A: Are the interludes (Faulty Tap and Requiem For 11th Earl Of Sandwich) mere segues, or do their brief moments carry heavier burdens, telling stories and shifting moods in little time?

M: Ah, now we are getting deep.  Tap was an extension of the frustration of Run put into something as simple and maddening as a leaky faucet.  Earl is kind of a death a civility thing.  So yes, they do contribute to the feel of the album in the form of a brief moment.

A: I looked up the 11th Earl Of Sandwich, John Montagu. Can you explain why he was chosen to be titular to your track?

M: It wasn’t the man in particular, it was more of an example of civility.  It could be a bit of a reach but when I think of civility I imagine Nobility. I hope he doesn’t become angry with me.

A: What does N/A/B/C/F mean? It’s one of my favourite tracks on the record, so I’m curious.

M: N/A/B/C/F is Not All Birds Can Fly. Originally released on (Manipulant’s 2016′ album) Méthode de Narration. This version took a different approach with different instrumentation so I gave it a different name – sort of.

A: Your EPK mentions Kraftwerk as an inspiration in Marshmallow Fabrik. Who are a few of the other artists you admire as being able to drive you towards your own creations?

M: I feel like I should explain Fabrik first.  I think many of us carry on as if we are living in a marshmallow factory. Everything is in order and it’s all fluffy and delicious. We don’t focus on things outside of our own space. We continue on with blinders as long as our personal factories keep producing things that make us happy.

Kraftwerk are a big influence for anyone that ever touched a $25 Casio.  Until Fabrik I never really noticed a defined influence on my work but it has always been there. New Order, the Fall, Legendary Pink Dots, Tom Waits, many others.

A: I read that this is your second record, 2016’s Méthode de Narration being your first. Not having heard Méthode myself, can you describe for us how Eclectro works beside Méthode, in what ways they’re similar or different? Does this second effort continue the first, or move in its own direction?

M: MdN was more of a feeling out process. Like what can I do by myself with a keyboard. It actually had a good amount of guitars and live percussion but it was certainly a step in cutting the cord which I did completely with Eclectro.

As for the songs themselves, they are mostly just stories of things. No real depth or theme.

So it is less of a continuation and more of an evolution.

A: Who is The Organist? Another player, an alter-ego, a character you made up?

M: The Organist is based entirely on a real person. In fact, most of the lyrics are actual quotes as the police led him away.

A: Anything else at all you’d like to add for our Dear Readers?

My huge thanks to Manipulant for agreeing to this interview, and for these excellent answers!

“The second Manipulant release mostly adheres to the blueprint of 2016’s Méthode de Narration. The hypnotic rhythms, dark tones and vivid imagery are all present in “Eclectro” due 6.20.17. This time though, he brings along some help. Italian Astrophysicist Dr. Fiorella Terenzi and England’s chilled trip-hop siren Stoneygate both join in with sterling contributions. The latter in the driving social commentary of “Run” and Dr. Terenzi, the Goddess of Acoustic Astronomy, vocal bombs her own tribute song in “Dr. Terenzi, I Need Your Expertise”. Additionally, “Methodical” comes dance floor ready, “Marshmallow Fabrik” harkens Kraftwerk and The Organist makes a twisted reappearance. Once again, Manipulant manages to draw the listener inside his head, drag them through his thoughts and drop them into an empty room to contemplate what the hell just happened.”