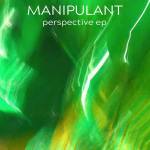 You’ll recall that I covered the excellent 2017 release Eclectro, and even interviewed the artist. Read it RIGHT HERE.

So, imagine my joy when an email appeared recently to say that a new Manipulant EP will drop on March 26! Happy days indeed, and thank you very much for the chance to hear this, sir.

This EP is 5 tracks in a total of 16 minutes. Let’s get straight to the tunes:

Wander, RTL is a short minute (and a bit) of synth intro, shifting from right ear to left ear, repeating notes creating a mood for… SandS, which takes the tone darker, that bell-like tone pulsing throughout as the drums lay down an energetic beat and the vocals drone and echo and reverberate. This track has a real push/pull to it, equally danceable and melodically meditative, and it totally works! It goes instrumental at the end, taking your mind with it on its journey, then dissolves into electronics…

A Fresh Perspective has a sound that’s slightly askew, jazzy and almost carnivalesque on the keys, as the fingersnaps and occasional cymbal crashes and drum hits provide intermittent reminder of the beat. The vocals are spoken, and sound like a megaphone being heard through a telephone, then amplified, as he advises us to step back, take a new look at things, which is a message I think needs to be heard. I loved this track for the quirky oddball that it is, because it is fearless, soulful, and unlike anything else I’ll hear for ages.

Next, I drifted along to Shiveresque, which brings a pulsing bassline, crash-like drum sounds, and more echoed vocals sung/spoken as a single note synth line repeats. This tune is very atmospheric, like some laidback, darker and more sinister Depeche Mode meets NIN track. It sounds easy-going, but don’t turn your back on it… there’s menace in its swagger. And finally comes All Good Boys, which offers timpani rolls and tapped beats, descending synth notes and a cool roaring/echoing sound that has falsetto vocals swirling in it. It’s another mood, another taste, another angle, and it’s awesome. A cool, haunting thing about it is that single wee vocal bit at the end as the music fades, which I take as a promise of more.

And all too soon it is over. Folks, this is a fully-realized, mature, wonderful piece of art. Each track transports you into its world, and holds you there. I thought of each track as a portal into unique worlds, where the sound prevails and your brain adjusts, accepts and then adores each stop along the way. I loved the overall sound, very roomy and open and expressive, enveloping in all the right ways.

I fully recommend you check out this EP when it drops March 26, as well as getting 2017’s Eclectro!

Here’s the info you need:

And here’s the official press release for Perspective:

Newbury, 26/03/18-Lancaster, PA based artist Manipulant (David Speakman) reveals his third release, ‘perspective’ on UK label Submarine Broadcasting Company (catalog #SBCE005).  perspective, a five song EP, tails the self-released ‘Eclectro’ (2017) which placed on several year-end ‘Best Of’ lists and helped him collect a nomination on the Wigwam Online Radio Awards in the ‘Best Indie/Alternative Act’ category. “This record is so much more personal than my past efforts” said Manipulant. “Before, the songs were just stories. These are pieces of me, reflective of my current state. The music, though electronic, avoids sterility. It’s very imperfect, just as we are.” Manipulant cites The Fall, Tom Waits, The Legendary Pink Dots, & Brian Eno as stimuli.

Posted on March 5, 2018, in posts by aaron and tagged manipulant. Bookmark the permalink. 7 Comments.