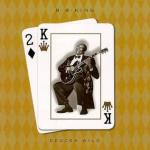 It’s B.B. King, and tons of duets with so many greats. What else do you need to know? Get this and fall in love. 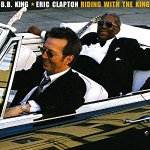 That oughta cover it, eh?

But of course I can go on…

Hot damn I love this album. So did lots of other people, as it won the Grammy for Best Traditional Blues Album in 2001, and it went 2x Multi-Platinum in the U.S. Yes.

I was gonna type all this out, but Wiki has got me covered:

The album contains five “vintage” King songs from the 1950s and 1960s: “Ten Long Years”, “Three O’Clock Blues”, “Help the Poor”, “Days of Old” and “When My Heart Beats Like a Hammer”. Other standards include the Big Bill Broonzy-penned “Key to the Highway” (which Clapton had recorded in the early 1970s with Derek and the Dominos), Chicago pianist Maceo Merriweather’s “Worried Life Blues”, a cover of Isaac Hayes’s composition “Hold On, I’m Comin'” originally a 1966 single for Sam & Dave, and “Come Rain or Come Shine” from the 1946 musical St. Louis Woman. The album’s title track, “Riding with the King”, is a John Hiatt composition that came about when producer Scott Mathews recounted to Hiatt a strange and abstract dream he had of flying on an airplane with Elvis Presley. It is also the title track of Hiatt’s 1983 album of the same name that Mathews co-produced. The balance of the tracks were written especially for the album.

What else do you need? This is laid-back, beautiful blues from two of the best practitioners of the art who have ever lived.

How did they even decide who got their name first on this album? I’d suppose B.B.’s first as a sign of respect from Eric? Right on.

Riding With The King is a great album, made by two guitar legends and a top band. They were clearly having fun, here. I’m sure you can imagine what it sounds like, given these two players, without ever having to hear them play a note. Still, it’s really, really worth it to dig into this album.

The title track slinks along, and even has a bit of spoken word from B.B. Not a bad introduction, indeed. Ten Long Years is pure B.B.-sounding, but both guitars are doing all of the talking on this slower blues. Hot damn. Key To The Highway goes acoustic, a nice touch. Marry You is 70’s funk blues, a really swinging track. Clapton’s vocals are played a bit too straight, but so what?

Three O’Clock Blues here is pure gold, a last song of the night, after last call, a blues to send you off into the night. So sweet, one of my favourite tracks here, just for mood alone. They play Help The Poor, an old B.B. standard, fairly close to the way it has always sounded. Still a nice shuffle to it. I Wanna Be feels like it could have been one of the stronger tracks off Journeyman, and that’s alright with me. Worried Life Blues goes acoustic again, pure old blues in the best tradition. Another favourite here. So it seems I like the slower tracks, here. Interesting.

Days Of Old is a jump blues that really cooks. It’s impossible to sit still listening to this. Blistering solos, and great piano work. When My Heart Beats Like A Hammer is another sweet, low down and slow blues. More great piano all over this one. This one just drips with blues. Hold On, I’m Coming! is a song title that, no matter who does it, always makes me snicker like a schoolboy because it’s never what I think of when I read or hear those words. Anyway. This is a credible version, about half-speed from the Sam & Dave version to which you’re probably accustomed. And bringing up the rear is a lovely love song version of Come Rain Or Come Shine. B.B.’s vocals sound particularly fragile, which lends beauty.

I could listen to this record anytime. Of course there are tracks I’d pull out for a mix tape, but there truthfully isn’t anything close to a mediocre track here. Put these two legends together, and that’s what you get. Brilliance.

Every record tells a story