Alright, as mentioned in my last post (a couple of hours ago), I’m playing catch-up for missing yesterday. Here’s another gem I found in Sonic Boom (with Mike) for $0.99… 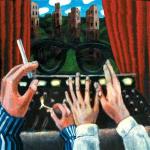 This collection of outtakes and rarities from 1985-1994 plays like a damn hits record. Goddamn this band is so good. These are their outtakes? Most bands would kill for songs this good as their lead singles for radio! Seriously, this isn’t fair to most mortals.

OK, so my love of the band is showing, but it’s well-deserved. This set even came with an extra disc, containing a song-by-song dialogue by Neil Finn.