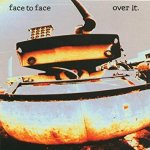 Fire up for this 1994 EP, seven tracks over and done in 20 minutes, and with more than enough edge to make a lot of the pop-punk bands of today sound like they’re still cutting their teeth.

Wiki tells me this disc contains remixes of songs released on Don’t Turn Away (1992), as well as original material. It is also the first appearance of Chad Yaro on rhythm guitar. Track information includes a preview of “a.o.k.” which later appeared on Big Choice as “A-ok.” Also, “Don’t Turn Away” was on the No Authority 7”, but this is it’s first CD appearance.

Oh, and by request of the band, this EP is no longer in print. WHY? I think it’s awesome.

Turn it up and get yer punk rock fix. Actually, I found myself listening to Trever Keith’s lyrics more than the music, even though my ear (and my heartrate) was pulled towards the tight beats and riffs. It’s refreshing to hear a singer in a band like this not be so nasal and shrill, he sounds real. Even better, he’s telling truths, and telling them straight – as only the best ever do.

Every record tells a story