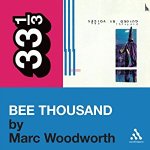 It should be well-known around here, by now, that I am a big fan of Guided By Voices. And so, no one should be surprised that I bought this book as soon as it came out and read it as soon as I got it home.

Part of an on-going series called 33 1/3, which looks at a whole slew of Classic Albums, Bee Thousand is #38 and the first one in the series that I’ve read. I can’t speak to the rest of the books in the list, but this one is really quite excellent.

Woodworth does an interesting job of deconstructing and analyzing the album. There are essays, stories and quotations from band members a few word games, and listener responses to the record.

Bee Thousand is usually listed as the album that “broke” Guided By Voices into the mainstream consciousness. This does not mean that any of the many albums that came before were lesser in any way. It also does not mean that the recording is better produced or “more perfect” than any of those previous records. It is still a collection of songs recorded in the basement on a 4-track, just like a lot of their earlier work, and it still revels in its imperfections. But this album contains no bad songs, no unlistenable noise experiments, no total space-outs that only a fan could love, and so by being slightly more accesible it stepped up onto a wider stage of recognition. It should also be noted that I strongly doubt that this was a calculated move on GBV’s part. It probably just worked out that way.

In my own opinion, the album Bee Thousand kicks some really serious ass. It is perfect in its imperfections, and the track listing is exciting and gorgeous and worthy of a million repeated plays. The book Bee Thousand does a pretty good job of talking about just why someone like me (and maybe you too) would feel that way about it.

All in all, this is a good read and a nice ode to a fantastic record.