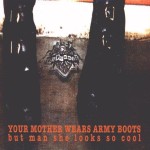 Montreal’s Ripcordz have been around since 1980, making solid punk rock music, and for that we love them like brothers. Only the gravely-voiced lead singer, Paul Gott, is an original member at this point, but who cares? They rock.

This 1996 effort was an instant grab at BMV for me. There’s energy and intelligence in this music, so even if they try to pass themselves off as dumb punkers don’t believe them for a second, and never set your beer down or they’ll drink it on you. Hell, they even cover What A Wonderful World as only Ripcordz could. If you’re a fan of Rancid, you could hear a lot of where they got their sound in the Ripcordz’ genius.

Also, ages ago, I slapped up a blurb in a Sunday Service about the Ripcordz tribute CD, Ripcordz As Fuck (so-named because their album that year was called Canadian As Fuck, natch).

Check out the record here! Buy it too!

Rock the opening track below…