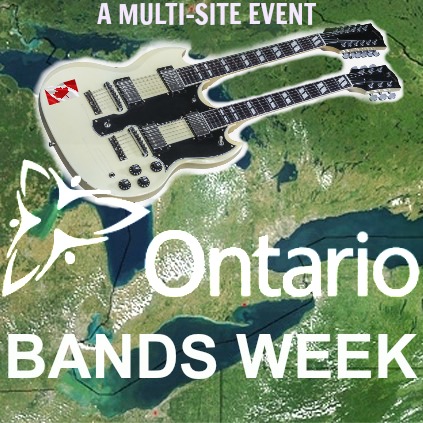 Get yerself a healthy eyeful of this glorious series logo made by the illustrious Mike @ mikeladano.com! Don’t you just love it!

I bought this, years ago, not knowing who the band was. I just liked both the band and album names!

Little did I know that I would fall in love with this Hamilton, ON band’s work. I’ve actually sat here quite a long while, trying to come up with the right words to describe it, let alone tell you all the good things about it. I’ve written and deleted many lines.  None of them felt adequate, for this thing they created.

I guess I’ll try it this way:

There’s a timelessness to the sound, appealing for so many good reasons. It’s rock but also punk, psychedelic but also electronic. If it’s any indication, they chose their band name as a tribute to Pink Floyd’s A Saucerful Of Secrets.

Formed in 1973, the band actually only ever released one 7” single in 1978, before breaking up. That is… underwhelming. However, as Wiki points out:

An abortive recording session with producers Daniel Lanois and Bob Lanois from 1974 and a June 28, 1975 concert performance on the roof of Jackson Square were later compiled for the 1989 album Cyborgs Revisited. Cyborgs quickly came to be regarded as a lost classic of Canadian music, being named one of the greatest Canadian albums of all time by the magazines Chart, Forced Exposure, Pop Matters and Alternative Press, as well as the appearing as the 36th best Canadian album in Bob Mersereau’s 2007 book The Top 100 Canadian Albums. The need to capture the band’s unconventional sonics has also been credited as one of the first catalysts for the development of Daniel Lanois’ distinctive production style, which would eventually make him one of the most influential record producers in the world. Cyborgs was subsequently reissued on Sonic Unyon in 2003, with several bonus tracks including the 1978 single.

Mine is the 2003 re-release, and it is a glorious thing. The instrumental freakouts are fantastic, the bluesy energy is high, and the willingness to experiment is writ large all over it. In reading about it online, I saw lots of references to Velvet Underground, and the Stooges, Pink Floyd (especially Syd-era) and Eno electronic noise, Hawkind and Silver Apples and Troggs and… ach, all of this is well and good (and hardly wrong, especially the Stooges bit), but they also sound only like themselves.

I love it when you buy a record on spec, and it becomes a trusted and lifelong friend. This is one of those records. What a trip!

Instant Pleasure / Electro Rock / Nazi Apocalypse / Mole Machine / Bullet Proof Nothing / Here Come The Cyborgs, Pt.1 / Here Come The Cyborgs, Pt.2 / Dance The Mutation / Illegal Bodies / Low Profile / Little Sally / Get My Thrills / I Take It / Yes I Do / Bullet Proof Nothing (live) / Now’s The Time For The Party (live) / I Can Change My Mind* / She’s A Dog*