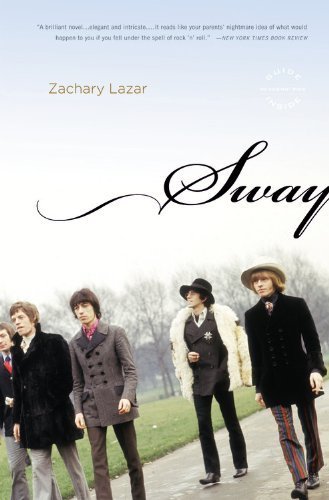 Every so often, you read a novel that you truly enjoy. More rare, you read one that’s so good you wish you’d written it yourself. And the rarest of all is a novel that transports you to its time and place, so that you’re not wishing you wrote it, it’s so perfectly-realized that you are it, captured happily by its power long after you put the book down.

Lazar’s Sway is all three of those, in one. It’s been so long since I read a book this damn good. In its hypnotic swirl are the early Stones (and the death of Brian Jones), Kenneth Anger, the occult, the Manson murders, the Kennedys, Altamont and the Hell’s Angels, all stage scenes for the death throes of the Sixties. It has its own clear-eyed way of looking at the world, which comes easily across in its feel, as friendship, beauty and art crash into raw violence and descent. The language is enveloping, each word perfectly-chosen and placed, the characters written as though Lazar had been there in the room to witness it all, merely a reporter on the waning of a generation.

Sway held me in its sway from cover to cover. I truly cannot recommend this book enough.