Go get a coffee. This is a month-long tale, so I’ve broken it up into a timeline:

December 29: I went to order, it was already back up to $15. I clicked New sellers… Amazon themselves were $8! Why the two prices? I dunno. Can they even be secondary sellers on their own site? I also ordered Baroness – Purple and Rolling Stones – Sticky Fingers 2CD. It was enough to get free shipping.

January 4: Baroness and the Stones shipped. No Keef.

January 8 (I think): I called Amazon. The guy seemed baffled in general, not just about the order, but said it would be shipping on January 11th. I said “why isn’t it already shipped? It’s In Stock. It has always been In Stock. It should have come with the rest of the order, right?” He had no answer. He said it was coming soon.

January 18: Still hadn’t shipped. I called Amazon again. I said “Where is my CD? What is going on?” The lady said it would ship soon and should be here by the 27th. That’s just shy of a month since I ordered it!  I said “like hell it will. How does it take you a month to ship me a CD that is still In Stock. It has never not been In Stock. It’s a brand new release. It’s Keith Richards of the Rolling Stones, not some rare thing. All it takes is for someone to go into your warehouse, get a copy, and put it in an envelope with my name on it and drop it in the UPS bin. Why can’t you simply do that?”

She apologized and bumped it up to Priority. Later that night I got an email saying they’d changed the order status (which I already knew from the phone call), and it gave a delivery date of anything up to the 27th anyway! So much for priority.

January 22: It was still not shipped (do they know what Priority means?)! When I called again, they still had no good answer, so they got a good rant from me about how it was taking them a month to ship me one bloody new release CD. This time the lady, Lailani, promised to personally call me on the 27th to confirm I’d received it. I told her if it arrived on the 27th, she’d be receiving an official complaint from me about their service when she called.

January 27: No CD. No phone call. Then, late that night, the CD shipped.

January 28: The CD arrived late afternoon. UPS left it in a clear plastic bag tied to my front door.

I called Amazon, because I could not find anywhere on their website to actually leave Amazon feedback on an order, like you can do for secondary sellers. I wanted to spit-roast them in my review. Turns out, you’ve gotta call them. By now I’m an old pro at calling Amazon.

I got Hillary, in Kentucky, and gave a 0-Star review, and told this whole tale.

Hillary made it all better.

She was truly appalled it took this long. Apparently yes they can be secondary sellers on their own site, but it still just comes from their own warehouses, so she saw no reason it didn’t ship.

She was shocked that none of the other three customer service reps I spoke with tried ordering it again to get a new one to ship and then just cancelled the first order. She was really sickened that that lady did not call me when she said she would. She wasn’t acting, she was horrified!

Here’s what she immediately did:

1. Refunded me the full charge on the CD.
2. Gave me a $10 credit on my next Amazon order.
3. Sent my 0 Stars review on the order to her management.
4. Sent notice to the no-phoneback lady’s management for follow-up.

So then as the conversation went on, and to try to helpfully illustrate how I could understand it with a secondary seller (but not Amazon), I told her my story about the 2TB hard drive (you’ll recall my post about that), and how the seller absconded with my money while I waited two months. I was sure to include that Amazon stepped up and refunded my $70 right away. Then I finished with how I’d had to re-order at their higher price ($115) for the same thing.

She couldn’t believe the rep I dealt with at the time didn’t offer to order me one from their own stock and just price-match it.

Here’s what she immediately did:

5. She refunded me the $45 difference (plus the taxes)  to price match my Amazon 2TB hard drive down to the $70 seller’s price.

I spent a month pretty mad at Amazon. I spent way too much time on the phone trying to get answers, and they still couldn’t even ship me a new release CD in under a month. More frustrating, for the time wasted versus money spent, I could just have walked the two blocks to my local shite HMV and bought the CD.

If you have any trouble with Amazon and you have to call customer service and you get the Kentucky office, ask for Hillary.

Late January 28: No-call-lady called. Said she was happy I had received my product and was pleased she could help me resolve this issue. I said whoa, wait just a minute. You didn’t call me when you said you would. She interrupted to say she tried but got my machine and she couldn’t leave a message. [Now, Hillary in Kentucky had told me that she leaves messages for customers all the time]. Besides, even if an auto-dialer hangs up on our answering machine, it still leaves enough of a click through to make our message light blink to indicate we have a message (and a seconds of blank air). She totally lied about calling, I think.

I carried on… You bumped it up to “Priority” and it still arrived a full day after your last possible day for delivery (which is one day shy of a frickin’ month). Besides all of which, you’ve now got the nerve to call me a day late.

So no. You didn’t help me at all. I have already dealt with another of your associates and she made it all better with absolutely no help from you. If this call is to try to save your own skin after she sent your manager notice that you hadn’t called me when you said you would, you’re too late. You dropped the ball on this one.

There was a pause on the other end of the line, into which I said I sure hope you have a great night. Goodbye. Then I hung up.

Final Note (probably in open G tuning): I hope Keef appreciates the lengths I went to in buying his goddamned CD. 🙂 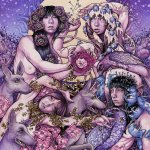 It’s well established, in these parts, that I am a huge fan of Baroness. They are a monster of a band, and any new release from them is an event! Since I didn’t get a copy for Christmas (they released it on December 19), I got mine post-haste after the dust settled.

Here we’ve got a new Baroness – a couple of members chose to leave after that terrible bus crash they were involved in while on tour (in 2012). Would it matter? Would they keep making music? Well, it took a while, but here they are!

I’ve been through the album in full three times now, and each time it’s as epic and glorious as anything else they’ve ever done. The guitars are heavy and restless, the drums are insanely good (seriously, Sebastian Thomson is a monster, well worthy of the legacy of Allen Blickle’s excellent work!), and the whole thing just stomps you happily as it melodically demolishes the landscape. There are beautiful parts that pull you in, and then bam! Wake up! Haha I love it.

Every Baroness record is slightly different, yet fully of their sound. Other bands must surely envy the majesty!

Purple stands tall in the Baroness discography. I welcome Baroness back, new members included. This is 42.5 minutes of bliss!

PS The epic song Kerosene needs to be a single for this record! What a great tune!

I promised Deke a metal bomb, so here ya go!

What a day yesterday was… 30cm of snow fell, and when I wasn’t out clearing all that away, I was inside letting the majesty and power of Baroness wash over me. It’s tidal. Expressive and expansive. Tight and controlled yet massive and a bit overwhelming (if you’re caught unawares). Lean and aggressive, confident it could take you in a knife fight, this is heavy metal that steamrolls you with riffs hewn from molten rock and its intense, epic nature. But for all that musculature, there are many moments of heart-wrenching beauty too, texturing the songs into unbelievable conceptual masterpieces. Repeat listens reveal further layers, treasures waiting to be unearthed. Does that sound like hyperbole? Sitting through as much Baroness as I did today, and these are albums I already know well, is to feel intensity in every fiber of your being, to pulse with that complete energy that only the most irreplaceable metal contains (not unlike classical music, as you’re aware). So no, there is no hyperbole in any of this. Utterly superb.

* Split 4-song EP with the Unpersons. 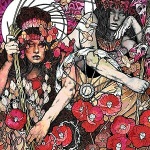 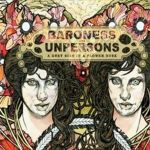 A Grey Sigh In A Flower Husk 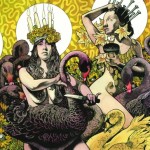