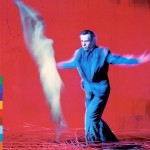 This ain’t part of my Taranna scores, I just wanted to rave… I got this at work for cheap, and it’s the best damn CD I’ve played in a while. The music is just so beautiful, and uplifting… even though Wiki says “On this album Gabriel explored the pain of recent personal problems; his failed first marriage, his relationship with actress Rosanna Arquette, and the growing distance between him and his first daughter.” Well alright, but the music is so good, so many world music influences and sounds, all these epic swells… And there can be beauty in tough lyrics, too, if it leads to healing (which I think this stuff ultimately does). And I mean, how do you argue with Come Talk To Me, and right off the top of the album? You don’t! What a track!

Other singles were Digging In The Dirt, Steam, Blood Of Eden (f. Sinéad O’Connor), Kiss That Frog, and Secret World (promo single, as was Come Talk To Me). And: Just look at the personnel on here! I mean… Tony Levin, Daniel Lanois, John Paul Jones, Brian Eno, sooo many more! Wild.