This 1994 debut album from Branford Marsalis’ jazzy hip-hoppy soul r&b reggae rock project is an absolute keeper. The groove is complete, the mix of jazz, world music, hip hop, hell, all the ones I already listed, is perfect. Have a look at the personnel list (below), too.

Throw this on, groove the night away. Add in vocals from Maya Angelou on I Know Why The Caged Bird Sings, and a cover of Elton John’s Mona Lisas (And Mad Hatters), and… you know all you need to know.

I swear. SO GOOD. 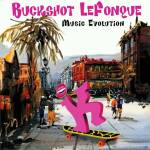 “Buckshot LeFonque was a musical group project of Branford Marsalis. The name Buckshot LeFonque was a pseudonym used by jazz saxophonist Julian “Cannonball” Adderley for contractual reasons on the album Here Comes Louis Smith (1958). After playing with Sting, Miles Davis and other artists, Marsalis founded this band to create a new sound by merging classic jazz with rock, pop, R&B and hip-hop influences.” (Wiki)

This is a really funky, fun album covering all of the influences listed above. Guest artists include David Sanborn, Guru, and Laurence Fishburne (yup, Morpheus!), as well as (if you’re a fan of the Marsalis’ work, you’ll know) Reginald Veal, Ben Wolfe, and Delfeayo Marsalis, as well as a ton of others, all of them at the top of the game.

I am a fan of A Tribe Called Quest, Jurassic 5, the Roots, as well as a whole ton of trip-hop bands besides, any act that adds that funky soul jazz groove to their music. Guru, Us3, St. Germain, you name it, I just love it. This record goes right onto that stack of greatness with aplomb.