“What kind of people go to a Prozzäk show?” asked Mika. “Apart from you, I mean.”

Well, there goes my joke answer.

Judging from this show, I’d have to say 30-year-olds. And me. Which I guess makes sense. I can’t say it’s what I expected, but I didn’t really know what to expect, going to see a band that sort of doesn’t actually exist.

For the uninitiated, Prozzäk is made up of two guys, Simon and Milo, who I will surely call “Milo and Otis” at least twice in this thing. Simon is lovelorn and has no neck, while Milo is less expressive and kinda beefy. They’re also cartoon characters, so I wasn’t sure how this whole thing was going to work. Would this just be me watching cartoons for 90 minutes?

Answer: not JUST that.

Prozzäk was formed by two members of the Philosopher Kings in the late 90s. I remember being very surprised when I found this out. The two bands don’t sound anything alike, though I suppose the reason why you’d start a second band when you already had a reasonably successful first one would be to do something different.

The Americans among us may not have heard of Prozzäk but some of their songs that were released in the States as being by “Simon and Milo,” presumably to ward off any litigious pharmaceutical companies. They (the band, not Eli Lilly & Company) also had some sort of deal with the Disney Channel at one point, which seems like a questionable fit – they were cartoons, but not a kids’ band.

Prozzäk’s music is catchy electronic dancey pop that is not normally my thing, and yet here we are. I never bought any of their CDs – I could see that being too much of a good thing – but always found them to be kind of a guilty pleasure. So off I went to the casino, expecting a nostalgia trip and not sure what else.

I got there just before the show was scheduled to start. A DJ was on stage, playing music while standing between inflatable Simon and Milo heads. A local radio host came out to start the show, but we got 20 more minutes of who I learned was named “DJ Ageless” before abruptly shutting things down to make way for Prozzäk. He did not look particularly ageless to me, but to be fair, I was standing in the back.

There was a cartoon intro to the show that told the Prozzäk origin story, about how they were enemy warriors who were chosen by God (presumably) to travel through time to present day and search for true love. In looking things up for this review, there’s an element of truth to this – apparently, in the Philosopher Kings, “Milo” and “Simon” (they have real names but who cares) didn’t get along to the point where Milo hauled off and decked Simon. This led to them working out their issues, eventually forming Prozzäk (and a production company called Lefthook, named after the fateful blow).

After the cartoon intro, there were… more cartoons. Videos ran the full length of the show as a backdrop for the three actual humans on stage – Simon, Milo, and a girl who didn’t seem to be part of the Prozzäk mythology but added a much-appreciated energy to the proceedings all the same. When she wasn’t singing backing vocals, she was jumping up and down and running around, trying to get the crowd into things. 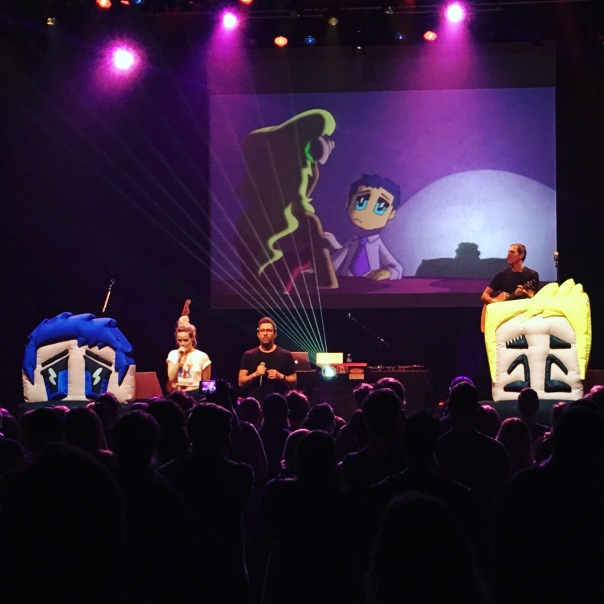 Like I said, I only know the singles, and on this show, they were bunched together, so it was Strange Disease and Ombolasire, then a looooooooooooong stretch of songs I’d never heard, followed by Saturday People, Be As, their cover of Wild Thing, and http://www.nevergetoveryou, with Sucks to Be You as the encore. Looking at album tracklists, I know they also played Tsunami, Pretty Girls, Hot Show, and at least two new songs from their album coming out next year – Love Fools Anonymous and Baby I Need Your Love (Pussy Cat Pussy Cat).

They sounded exactly like you remember, though they’re playing live over backing tracks and have to keep things timed to the cartoons, so that doesn’t lend itself to experimentation. Not that this is a bad thing, it’s just one of those shows where it will be pretty much exactly the same from night to night. But if it works, why not? It was a fun show with a lot of energy. They played everything you’d want to hear in a tight 90 minutes and everyone seemed to have a good time.

They still sound very much of their time, back from when internet was still pretty new and pretty neat. Not only did they name a song after a URL, but they somehow ignored the .com part, choosing to focus instead on the www. – and it made liberal use of the ICQ “uh-oh!” chime (which I would like for my text message notification noise).

Posted in posts by james