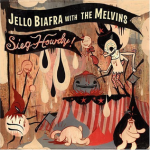 Without a doubt, this is the sleeper-hit of the batch I bought. WHAT A RECORD! Set the scene: I went for my nightly prowl through my local streets, good headphones and my iPod and BAM! the fucking Melvins blew my mind. Don’t get me wrong, I do love listen to Jello go off on his rants in his inimitable voice, but there were so many times I wished this record was just instrumental. The music here was absolutely killer. By the end of the thing, I had come around to liking it with the vocals too, though for me the music will always come first here. Critically, I knew this for the total prize that it is. I knew I had been pummelled, and I knew I would happily come back for more again, and again…

Hit It Or Quit It? Absolute HIT!

This is the first in what has become an on-going series of spoken word albums by Jello Biafra. For those of you who don’t know who he is: Wake Up! OK, OK, he was singer for the Dead Kennedys, a San Francisco punk band that had a lot of interesting things to say about democracy, government, freedom and censorship and many other issues facing America (and the world).

Well, it’s no surprise that this album of talking is no different, really. He rants about youth camps and the religious right, censorship and Tipper Gore, Ronald Reagan and the space shuttle. Yes, this was recorded almost 20 years ago, in 1987, but scarily, a lot of the things he discusses are still prevalent in the news today. Not much has changed, just the names of the leaders and the countries with which America is at war.

He must be very disappointed that we’ve allowed ourselves to remain unquestioning, consumer sheep for this long. In fact, I know he is, as he just this year released his 8th album in this series (In The Grip Of Official Treason, on his own, independent record label, Alternative Tentacles).

But what lies underneath all of his histrionics and his jokes is a realism that cannot be denied. The fact that he is so angry at what is happening in his country (and to him personally, actually), and the fact that he loves his country enough to question it, is a helluva a lot more than most people can say for their own convictions.

It takes someone like Jello to stand up and say “No! I won’t blindly accept what you’re telling me! I want to think about things and do things for myself!” to, hopefully, open the eyes of even a few others. But are you listening? Do you shrink away from his voice because you don’t want to Go Against The Norm, or do you admire his desire to bring about change? And by the way, what are you doing in your life right now to try to change things? What are you doing for Truth? Hmmm?