You May Think You’re Cool 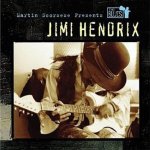 This disc is from Scorcese’s TV documentary series (there are a bunch of discs from it, I have a few). Let’s be honest, we know what we’re getting going into this, right? I mean, it’s Jimi, playing a bunch of blues tracks… what more do I need to say? 😉

Even better, it has two previously unheard tracks? Yeah baby!

This post is the final entry charting all of my finds during my trip to Taranna with my lovely wife for our anniversary! Thanks for reading along!

Here’s how I came to buy this one: we were in the HMV at 333 Yonge, buying the new Carolyn Mark album (see yesterday’s review). At the register, they had the inevitable stack of CDs and DVDs you can get for lower price if your original purchase is over a certain amount (I think $15? Something like that). Anyway, the Mark album was $20, so I could get anything from the CD stack for $8. And right there in front was this Hendrix set. Instant purchase!

This is a compilation of tracks Hendrix was recording for a double album prior to his death. They’ve all seen release before on other records, but this one’s compiled as close to his vision as believed possible.

I shouldn’t even be trying to write this up… But it’s Hendrix, right? So…The solos are just blazing, the band is in top form, and the songs themselves are just so damn strong.

The included making-of mini-documentary DVD is fun too.

It’s all been said about Jimi Hendrix a million times already – he was an inventive genius, he changed the way we think about the guitar, he died far too young, he’s a legend… and so on. You know all of this already.

Blast yourself back to 1967 with this, the Jimi Hendrix Experience’s first release, and you’ll see exactly why everyone raves. There are so many classic songs here, so many hits (and ones that should have been) that it’s ridiculous.

09 Third Stone From The Sun