Ever since listening to that live INXS record, I’ve had New Sensation in my head. It’s a classic tune, of course, and was a big hit for the band.

There’s one sections of lyrics, though, that stuck out for me, and I wonder if anyone said the same to Michael Hutchence. I hope so: 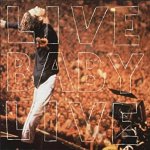 I used to own this, years ago. It was a cassette, of course. No idea what happened to it. So when this came in at work and no one else bought it, nostalgia washed over me and I grabbed it up right quick.

INXS was a big part of our childhood listening, especially Kick and, for myself more than my sister, X. Honestly, I imagine it was the same for a lot of people. This live album (from 1991), is their “…first live album. It was released on 11 November 1991 and features tracks recorded during their Summer XS Tour in Paris, New York, Chicago, London, Dublin, Glasgow, Rio de Janeiro, Montreal, Spain, Switzerland, Melbourne, Sydney, Philadelphia, and Las Vegas.” (Wiki)

Interestingly, “The title’s two uses of ‘live’, indistinguishable by spelling alone, are pronounced differently – according to The Greatest Hits album’s accompanying booklet – the first is pronounced to rhyme with ‘give’, whereas the second is pronounced as in ‘five’.” Why? Because they could, that’s why!

Myself, I had a blast listening to this. If I could zap myself back in time and go to an INXS concert, this could be a setlist I’d wanna be there to hear (sure there are a ton of songs missing, but whatever). Still, not everyone liked it: “Allmusic gave the album one star out of five. AllMusic‘s reviewer, Stephen Thomas Erlewine, was unimpressed with Live Baby Live, “[it] is a lifeless live album … All of the performances sound like the studio versions, stripped of their excitement and savvy productions”. Well I disgaree, Mr. Erlewine of Allmusic, but you’re entitled to your opinion, as am I!

If you have a nostalgia for this band, and you see a copy of this in your travels, get it. It’s fun!

CD Tracks:
New Sensation
Guns In The Sky
Mystify
By My Side
Shining Star* (the album’s only single)
Need You Tonight
Mediate
One X One
Burn For You
One Thing
This Time
Stairs
Suicide Blonde
Hear That Sound
Never Tear Us Apart
What You Need

PS: This was also released as a DVD, recorded at Wembley Stadium during the Summer XS tour on July 13, 1991. The DVD has a different track listing from the CD, not just in order, but in the tracks appearing:

^ denotes DVD-only tracks from the Wembley gig. I count 11 of them!

A Collection Of Things

A Collection Of Things

1) Listening to INXS in the car with my three-year-old daughter yesterday, she asked me “Daddy, who’s Mr. Fine?” I thought I hadn’t heard her correctly. She repeated it, and then I realized: Mystify.

2) A little later, INXS still playing in the stereo, my daughter says to me “Daddy, that man sure is handy.” What? Who’s handy, sweetheart? “The man singing. He sure is handy!” OK, sweetie, whatever you say!*

And finally, on a non-INXS-related note,

3) Catching up on our John Oliver on the Tubes Of You last night, and came across the following… The subject: The IRS. To sing about the need to cut them some slack for the job they do? Michael Bolton. Keyword: anus. Several times.

Sit through this, it’s worth it.**

*Being (what I believe to be) a fairly good Daddy, I avoided telling her that he hasn’t been around to be handy to anyone for a long time, now [Wiki tells me it’s been 18 years]. And I especially avoided telling her why. I just let her enjoy the song.

** I have only included the song portion. If you want the full segment that leads up to the song, go here.