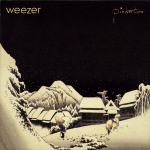 Where the blue album was pop sheen and enough crunch to satisfy the grungers, Pinkerton is grunge punk and not caring about being on the radio. It’s darker, meatier, and the relationship struggles are still ever-present. The production is grittier (and better, to me).

A commercial and critical failure, this album proves that critics and records buyers in 1996, wanting blue all over again, didn’t know what the hell they were talking about. I loved this one so much more. 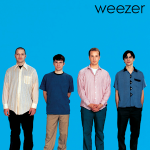 After Maladroit, folks recommended this and Pinkerton. I know a lot of songs here, having heard others’ copies repeatedly. Definitely of its time, there’s a reason the hits were hits – they’re different and interesting but still Weezer. Many of the other tracks have that 90s four-chord big crunchy guitar sound that quickly starts to sound very similar. They definitely have a Beach Boys-like quality, as well. I quite liked this, but I’d have liked it more twenty years ago.

I’ve gotta be honest, I don’t really know from Weezer. I never connected with them when they were big and popular, and have never really sought them out. I know some of their big singles, that’s about it, haven’t ever bought any albums before this. But my buddy Brian is a big fan, and some of the bloggers in our awesome community have mentioned a love of them, so when I found this one in the 3-for-$10 bin at BMV, I snagged it. I don’t even know anything about it, or where it fits in the Weezer story, but why not, right? Right!

Maladroit is the fourth studio album by the American alternative rock band Weezer, released on May 14, 2002, through Geffen Records. Self-produced by the band themselves, the album is the first Weezer album to feature bassist Scott Shriner, following the departure of former bassist Mikey Welsh in 2001. The album features heavy metal riffs, uncommon to Weezer’s previous releases.

Mmm heavy metal riffs… I like the sound of that…

Maladroit, for the record, is an adjective, defined as “ineffective or bungling; clumsy..” Somehow, without even knowing much about these guys, I’m doubting this album will be clumsy or ineffective. Let’s find out…

American Gigolo rocks with crunchy guitars and that pop punk grunge hybrid sound. A good album opener. Dope Nose keeps the crunchy going and is an incredibly catchy tune. Of course it was a single. Keep Fishin’ is pure Green Day, wow it’s uncanny*. It was also a single.

*Even the cover art somehow reminded me of Insomniac. But anyway.

Take Control goes for the big classic rawk sound and manages it mightily. It goes from quiet and chunky to wall of sound with a cool riff. Nice. Death And Destruction is the slow song, but it’s still heavy and loud. I quite liked it! Slob builds into a heavy chugger that has pretty good lift.

I should note by now that listening to this record is a little like listening to pop punk and metal made by people who really understand the fine points of pop radio number ones. There’s that sensibility to the whole thing.

Burndt Jamb is a funky soul jam, and even when the heavier guitars took over here and there, I liked this one a lot! Space Rock is exactly that, with lots of harmony vocals. Another wall of sound, this one just keeps blasting away. Slave takes up the mantle of Space Rock, but then shifts into a happy Sloan-like rocker. And from that reference you can infer I liked this one well enough.

Fall Together chugs heavily, guitars fairly burying the vocals and sounding quite a bit like other songs we’ve already heard. Great riff, though. Possibilities is more Weezer-does-Green Day, without Billie Joe’s snotty brat vocal stylings. I liked the backing vocals, nice touch. Love Explosion sounds, to me, like Weezer loudly trying to emulate Guided By Voices circa Do The Collapse. This is not a bad thing, it’s just something I noticed. And finally, December rockingly swings us out with a song that should probably be a slow and lovely song but is played with heavy riffing guitars and loud everything.

If this isn’t their usual sound, it oughta be. As I said above, there’s a real pop sensibility to the rocking out that they do here. I have no idea where this one stands amongst the Weezer cognoscenti, as I never looked it up. But I heard plenty to love, and I will definitely be playing this one again.

PS: There’s lots more about this record and how it was made, etc, RIGHT HERE.