Inspired by Deke’s recent posts about this band, I dug through the archives and discovered that I do have this 1997 Hits set by Boston. I threw it on and…

I’ve gotta say, this is some mighty rock. They play the ballads so well, but they also chug with the best of them. Even more impressively, they have a sound that, when you hear it, you know it can only be them.

Wiki says this disc contains all of their hit singles except We’re Ready, Can’tcha Say (You Believe In Me)/Still in Love and I Need Your Love, while adding three new songs – Higher Power, Tell Me, and the Star Spangled Banner/4th Of July Reprise. I don’t know about the songs that got left out, but this disc plays like one incredible album, and it certainly flows well enough from top to bottom.

A lot of what I read in reviews online said a casual fan really only needs to own their first album (Boston) and that’d be that. I don’t know, I like the other songs here too. Even not having heard the other albums, I don’t think I’d be so quick to write off everything after the debut. Maybe my mind would be changed by actually hearing them in full, but I doubt it. Boston knew what they were doing and they did it very well.

Of course I knew the hits here, such as More Than A Feeling (even the cheesy handclaps still worked, no matter how many times I’ve heard this song) and Amanda, but every other song here is strong too, in their own ways. I really think it’s the harmonies. As much as my ear goes to the guitar riffs, the stronger pull is towards the vocals. Simply great work.

Also, man, I played the song Smokin’ twice. Yeah, it’s pretty straight-on bar-room blues rock that’s totally fun, but that organ work slayed me! And I must also slip in here that I was laughing when I heard the Star Spangled Banner/4th Of July Reprise. Imagine a rock band making even a national anthem sound like they wrote it. Not sure it needed inclusion here but it was fun to hear it! And the Kalodner Edit of the song Higher Power is different enough to have on here, I suppose. More knowledgeable fans than I can tell you the differences between the two.

I think I got this brand new for $5, and it was worth every penny. I had great fun ripping through this disc. Thanks for the urge to give it a listen, Deke!

The track listing of my copy: 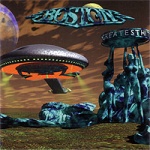