Hey there, Dear Readers, and welcome to a 2-fer of Steve Miller Band hits sets! By the time we’re done, we’ll have covered from 1968-1978, which I’ve played recently all the way through myself. I’ll do both records at 80 words each.

The Joker is here, and Space Cowboy, Gangster Of Love, Evil, and Robert Johnson’s Come On In My Kitchen. My Dark Hour’s intro has elements of Fly Like An Eagle’s intro in it. I loved Living In The U.S.A.’s “somebody get me a cheeseburger!”

This is a great overview of the early years. Recommended! 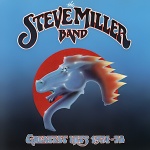 I’ve already covered this one right here, and I can narrow it down… Here’s all I need to say and you’ll know:

Any questions? Haha man I think we all had/have this one in our collection. This is so classic it hurts.

The Taranna Was Hot Series: Part 4/25

Initially, this was a purchase to correct the oversiiiiight of not actually having this disc in my collection. I mean, everyone owns this one, right? Well, everyone but me, as it turned out… until this past weekend, anyway.

It was also a total nostalgia purchase. We played the hell outta this disc in high school, we sang along to every word and loved it. I don’t need to tell you anything about any of the songs here.

But more importantly, as I listened back to it with my 2016 ears, I realized that the reason this was so appealing, so singable, so enjoyable, was that these are incredibly strong, well-realized songs. Even more impressive, these are all from a four year span (1974-78)!

Overall, they have a universal appeal, even non-fans could at least get along with these tunes.

How do you argue with this…?

See? Impossible. Non-offensive, superbly played classic rock we’ve all heard a zillion times. More information on this release, and other Hits sets for this band, can be found here.

Now, I do have one other memory of Steve Miller Band, and that was seeing them in concert in London, ON, at the Fairgrounds back in ’92. It was Bryan Adams’ Waking Up The Nation Tour, so we got (in order): Sass Jordan, Steve Miller Band, Extreme, and then Adams.

Miller was pretty out of it that day somehow, it seemed he was struggling to remember the words to his own songs. Actually, it was pretty weak. I got the feeling that if the crowd hadn’t been singing along with every word (and acting as a cue for him), he might’ve been a disaster. Ah well.

It doesn’t colour my opinion of this disc. It’s filled to the gills with great tunes, and was a cinch to grab from the 3-for-$10 bin at BMV. Score!